Everstrong Construction Ltd, based out of Georgetown, Ontario, has been selected as the general contractor for the Central Branch renovation project following a competitive two stage pre-qualification and tender process.

They have already started work, with demolition and hazardous materials abatement underway. We will post regular photos and updates as the work progresses. Here are some "before" photos of the empty branch before work was started. 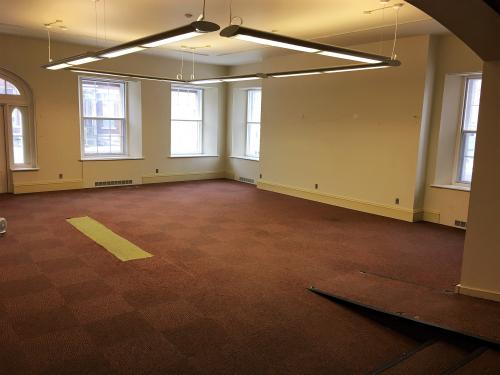 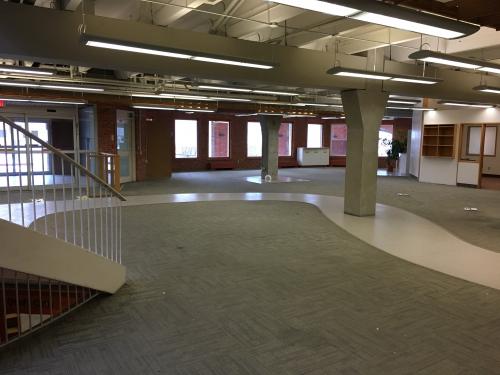 Please be advised that the public parking lot at the Central Branch will be unavailable as of Thursday, April 13, in preparation for construction to start early the following week. The parking meters will be covered and signage will be posted. The parking lot will remain unavailable until the renovations are complete in the Spring of 2018.

Questions about the renovations? We update our FAQ page frequently. Can't find the information you are looking for? Email us at centralreno@kfpl.ca or use our Contact Us form.

Several people have contacted the Library recently asking about the delay in hiring a contractor and wanting to know when construction will begin. The "Questions About the Renovations" section is updated on a regular basis, but it has been some time since a project update was posted here. We appreciate that there is great community interest in the Central Branch renovation project and that people are anxious to have their downtown library back.

The tender to hire a general contractor for the project closed on March 1, 2017. A general contractor has been chosen and the contract is being reviewed and is expected to be signed and finalized during the last week of March. Work on the site will commence almost immediately after the contract has been signed. The project is still expected to finish on schedule with the Central Branch re-opening in the Spring of 2018.

There were a few factors that caused the design process to take longer than expected​:

Because of the building's heritage designation and location at the edge of the Old Sydenham Heritage Conservation District, we had to receive approval of the proposed design and obtain a heritage permit from Kingston City Council. Plans were submitted to Heritage Kingston for review at their July meeting. Based on feedback received from Heritage Kingston, from the City's planning staff and from members of the public during our consultations in early August, the design was revised and a revised report was submitted to Council for their September 6, 2017 meeting. The heritage permit was granted, thus finalizing the exterior design, aside from some minor alterations that would need to comply with the conditions in the heritage permit.

The revisions to the original design made to satisfy heritage requirements required that the main entrance to the building, including the steps, sloped walkway and ramps, as well as the landscaping plan, be redesigned. The change to the entrance also meant changes had to be made to the interior space, particularly to the main staircase, vestibule, staff work areas and storage. After these design changes were made, the plans were reviewed by representatives from the Municipal Accessibility Advisory Committee (MAAC) who asked questions and provided valuable insight to make sure that the project complies with the City of Kingston's Facility Accessible Design Standards (FADS). Their suggested changes were incorporated into the design.

In addition to the revisions to the design, additional testing was completed. The pre-cast concrete columns were x-rayed to ensure they were strong enough to support the changes being made to the main staircase. Further investigation was done in several places around the exterior of the building to determine the condition of the bricks, insulation, vapor barrier in order to specify the remedial work to be completed on the building's facade.

All of this work contributed to the final drawings being finalized and the tender being issued about a month later than expected.

If you've been by the Central Branch recently, you may have noticed that the lights are on. We didn't leave for the day and forget to turn them off, we have had to leave them on intentionally.

Near the end of January, our last functioning boiler cracked its heat exchanger. The building works on a breaker system, so if we need power to the electrical outlets, that means the lights are on too as they are on the same breakers. The parts necessary to fix the boiler were going to be too expensive to obtain and take a long time to arrive, so temporary heaters are running throughout the building to make sure the pipes don't freeze.

Questions about the renovation? Don't hesitate to contact us at centralreno@kfpl.ca

It may not be apparent from the street, but we have been busy getting the Central Branch ready for renovations. It took almost all of December to move the bulk of the furniture, equipment, art and collections out of the building. We started with the staff furniture and computers during the first weekend of December, and worked steadily until just before Christmas moving items to our temporary office space, to other branches and, for some specialized items such as our art collection, to appropriate storage facilities. Since then, we have been removing the last few odds and ends and listing surplus items for sale on GovDeals.

We are in the final stages of reviewing the documents that will be used to tender the project and hire a general contractor to complete the renovation. The tender should be issued by the end of January and a contractor hired by early February. Construction will begin shortly thereafter.